For those who don’t know, one of the goals I established in my life was to catch and document as many species of fish in the world as possible. Today, I reached a major milestone in that goal, and also captured an amazing species of fish. From nearly 500 feet beneath the azure ocean surface in Kona… 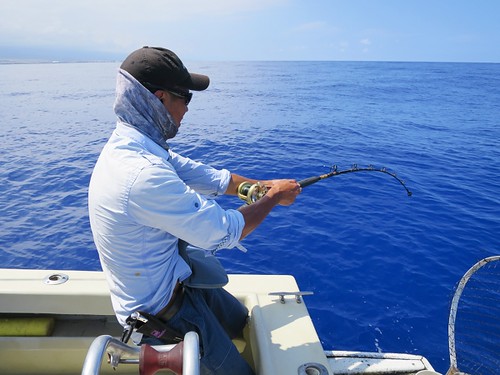 Aquamarine waves lapped against the side of the boat as the Hawaiian sun beat down overhead. I tightly gripped my rod as I watched the braid slipping down and away through the water. A marker on the line swiftly passed through the guides, as Captain Alan said, “That’s 400 feet!”

The 1 lb weight continued to plummet towards the distant seabed. The fathometer had marked a steep continental shelf dropoff that precipitously fell from a manageable 150 ft directly to 500 ft. A minute later, the line slowly slacked and I brought my rig 4-5 cranks off the bottom to keep the long leader from winding around any of the deep reef structures.

Not 1 minute later, I felt a sharp knock on my rod tip. Something hungry was lurking down there. Something big. I waited as each struggle of my bait was transmitted through 500 feet of line to my fingertips. Finally, whatever lurked in the depths had fully taken the whole mackerel, and I was confident my circle hook would latch on it’s jaws. I slowly reeled down, felt the weight of the fish, and gently leaned into it.

The response was immediate. The tuna rod loaded up as the monster at the end of my line went on a drag screaming run against my fully locked down Trinidad reel. After an epic vertical, horizontal, diagonal, every directional battle, something flashed it’s pink, violet and fluorescent green flanks in the deep clear waters of Hawaii.

Although not the exotic Opah or unusual Snake Mackerel, this fish was nonetheless an awesome addition to my species list, and simply put: 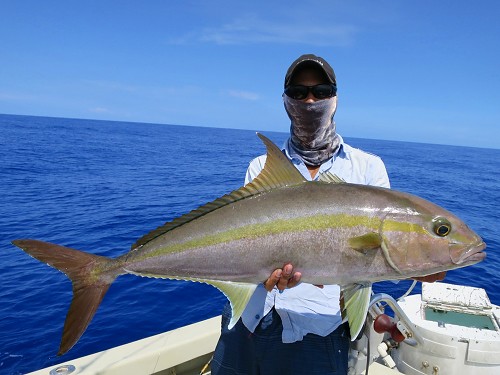